An Optimist’s View of Election Night

August 2, 2020 / nesler / Comments Off on An Optimist’s View of Election Night

If you pay attention to pretty much anyone who delves into the details of politics and elections for a living, you’ll find that they are terrified of how election night in November will play out.

Picture this Thanksgiving: Turkey, football (maybe), tenser-than-usual interactions with relatives. And perhaps a new tradition: finding out who actually won the presidential election.

The coronavirus crisis means that states like Pennsylvania may be counting mail-in ballots for weeks, while President Trump tweets false allegations about fraud. And the last barriers between American democracy and a deep political crisis may be television news and some version of that maddening needle on The New York Times website.

I spoke last week to executives, TV hosts and election analysts across leading American newsrooms, and I was struck by the blithe confidence among some top managers and hosts, who generally said they’ve handled complicated elections before and can do so again. And I was alarmed by the near panic among some of the people paying the closest attention — the analysts and producers trying, and often failing, to get answers from state election officials about how and when they will count the ballots and report results.

“The nerds are freaking out,” said Brandon Finnigan, the founder of Decision Desk HQ, which delivers election results to media outlets. “I don’t think it’s penetrated enough in the average viewer’s mind that there’s not going to be an election night. The usual razzmatazz of a panel sitting around discussing election results — that’s dead,” he said.

The scenario being hinted at here is that Americans will sit down in front of their TVs and computers on November 3rd, only to go to bed not knowing who had been elected president, but with mostly in-person votes which favor Donald Trump having been tallied, while millions of mail-in ballots remain to be counted, many still tied up in a postal system being cut off at the knees by a Trump appointee. And we’ll all awaken on November 4th to Donald Trump proclaiming that he’s been reelected, insisting that outstanding ballots being added to the totals after election day are the product of fraud, his protestations growing ever louder as we wait days, weeks, or even months for states to finalize their counts.

(It may be tempting to draw a comparison to the Supreme Court decision in 2000 which effectively awarded the victory to George W. Bush, but that decision halted a recount, not the initial counting of ballots.)

But not every elections analyst thinks it’s a given that we’ll be in the dark when dawn breaks after Election Day eve.

There are many notable, known names to pay attention to if you want an under-the-hood understanding of American elections, such as household names like Harry Enten of CNN, Steve Kornacki of MSNBC, and of course Nate Silver of FiveThirtyEight (though the last has been prone to increasingly common bouts of navel gazing over the last few years). Then there are those who fly under the radar, such as Rich Berg-Andersson, who for more than 20 years has done the massive amounts of research which forms the core of The Green Papers, probably the best resource anywhere for understanding the presidential primary system.

And then there are those who are completely anonymous, but who prove their skills by putting them on display. One such person is the man or woman behind the account 2020 Delegates on Twitter, who throughout the primary process this year has showcased an excellent ability to discern between genuine trends, and the noise generated by a restless press and a nervous electorate. Their extremely quick primary-night analyses have proven to be highly accurate, oftentimes days or weeks before most media outlets gave preliminary delegate allocation totals.

I am generally extremely cautious about putting any faith in anonymous persons, but when someone earns respect, well, their perspective should be taken into account. And 2020 Delegates, who generally doesn’t put much stock in more nervous or cautious takes, doesn’t buy into the narrative that we’re in for an election week/month/season disaster.

I’ve assembled a couple of their tweet threads, and a couple tangential discussions, into a single narrative. Their words are in gray boxes, while any commentary from me will have normal formatting.

Let’s assume this is what’s been able to be called at 10:59 pm ET on Election night, with only some close states remaining back east, and most of the west uncalled or still open. The election would still be able to be called within the next sixty seconds. 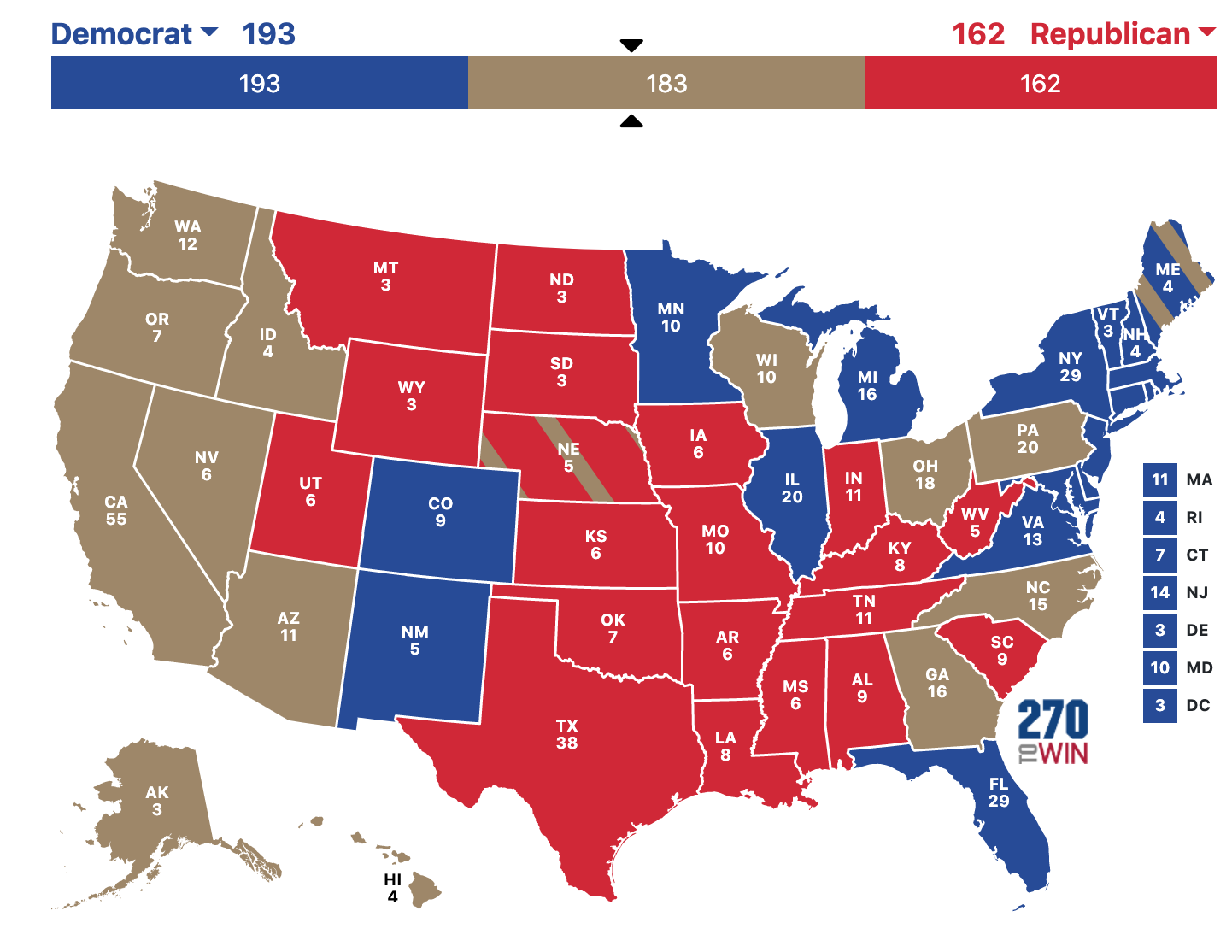 This is intended to be a conservative perspective, with Biden losing Texas decisively enough that it’s called within a couple hours of polls closing—which is not a safe assumption to make, given how the polling is there. Pretty much all the calls here are to be expected sooner rather than later on Election Night. New Hampshire might be pretty close, but tends to counts votes fast, and appears to favor Biden at the moment. Polling in Michigan and Minnesota favors Biden by very large margins, and the issues with failing to account for the differing behaviors of college-educated white voters versus working-class white voters which led to the big misses in 2016 have since been accounted for by most major pollsters. If the polls don’t change significantly, Biden will win those states.

But ah, sooner or later your eyes will fixate upon Florida. How could we possibly know what’s going on in Florida by 10:59 EST?! The state which gave the entire country a nervous breakdown in 2000? Well…

FL is going to release its vote dump early and we will know a lot… Proving my point… here is a screen shot from 2016. 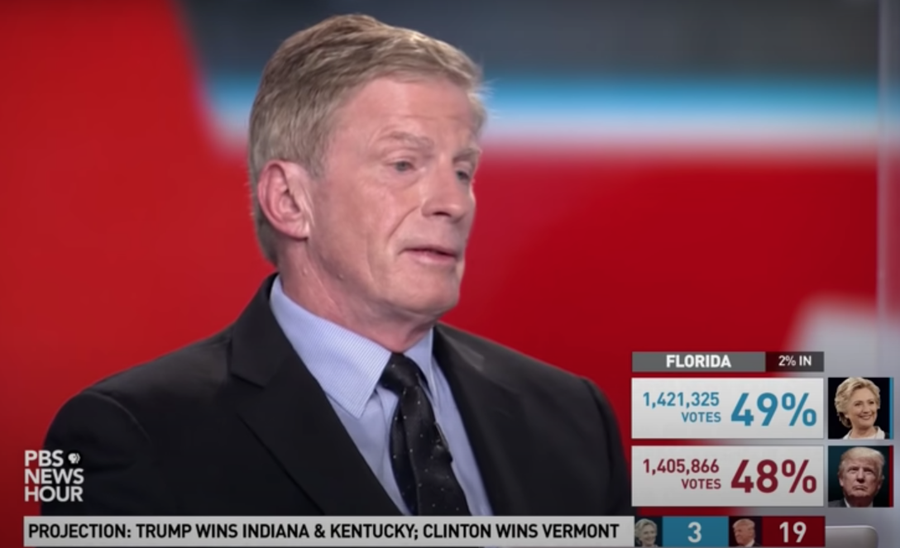 This was taken at 7:27 pm ET. FL had already counted ALMOST THREE MILLION VOTES by then (out of 9 million cast). If that early vote dump is heavy Biden, it will be very good news. Here’s another screen shot from 8:06 pm ET. 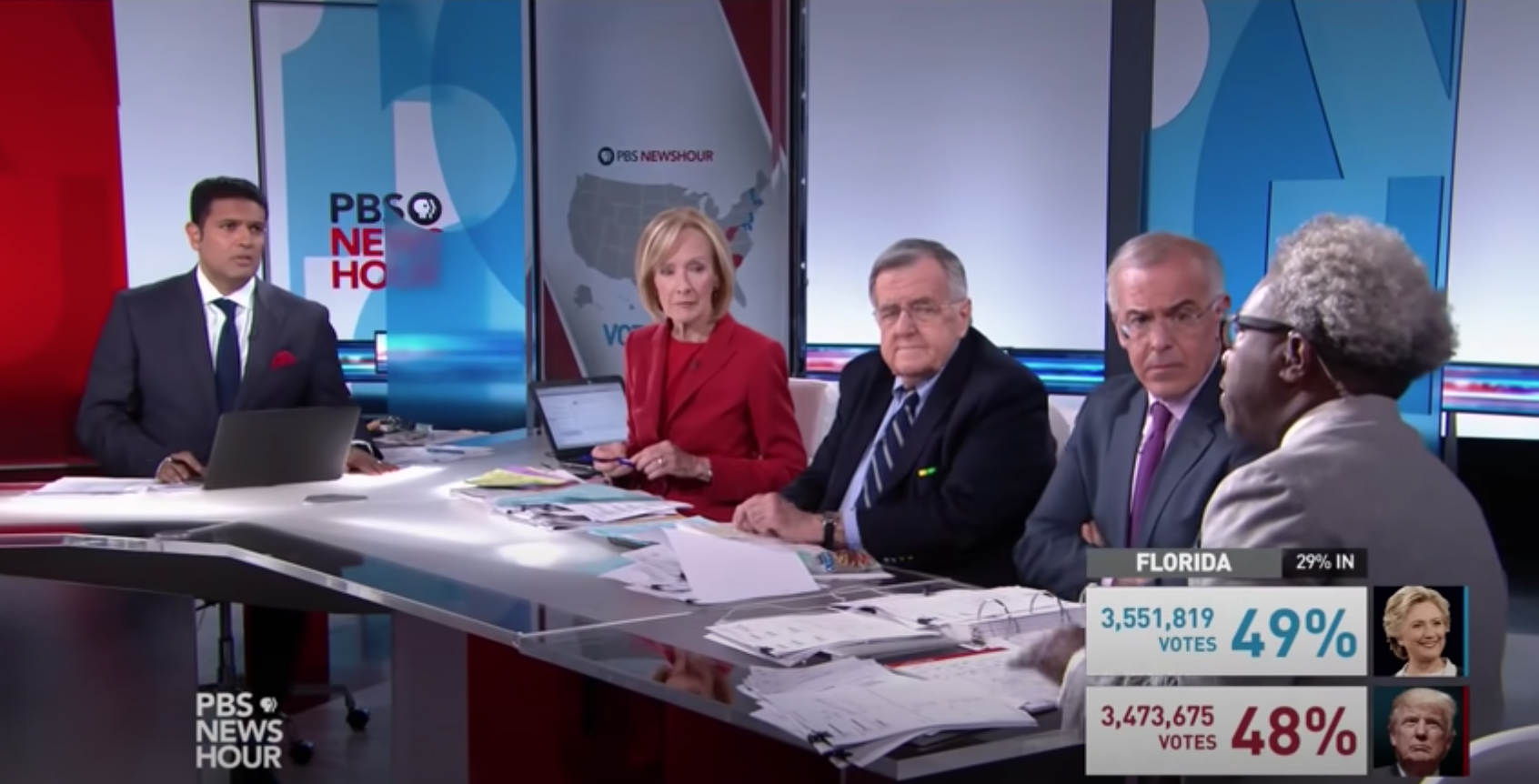 Florida had 77% of its eventual vote counted within an hour of the first poll closing. If there’s MORE mail in this year, which it appears there will be, it will be an even greater %. FLORIDA COUNTS FAST… The first votes counted are VBM [vote-by-mail]… Florida counted 77% of vote within 66 minutes of the first poll closing. If Biden is WAY ahead by 8 pm [given that no candidate has won Florida by 6 points or more since 1984, a lead of even 3 or 4 points with 75% of the vote in would be massive], it will be hard for Trump to win, eventually because Broward and Miami-Dade usually [report] last.

You may note, looking at the screenshot, that with 77% of what would turn out to be the final vote (ignore the “29% in,” as that’s just a measure of how many precincts have fully reported, and that metric is usually garbage), that Clinton had a lead of 1.1%, while Trump would go on to win by 1.2%. That’s a swing of 2.3%, which frankly isn’t much of a swing. But such swings must be accounted for, which 2020 Delegates acknowledges.

But Trump’s final margin of 1.2% was quite close to what the polling showed. A simple average of all the polls which were conducted partially or entirely in November of 2016 gave Clinton a margin of 0.3%, while the final result went 1.5% the other way. This is quite close in the scheme of things.

Right now, Biden is sitting on an average Florida polling margin of 6.5% in his favor. If he goes into election night with the polling looking that good for him, we likely won’t see him with a 1-point margin an hour in, as we saw with Clinton in 2016. Instead, we’ll see him with a margin of at least 3 points with 7 or 8 million votes in. If that’s the case, he’ll be an odds on favorite to win Florida. As 2020 Delegates put it…

I promise you, FL is going to do a VBM dump at 7:01 and people are going to freak the f*ck out.

And if things are going the wrong way for Biden, we’ll know on election night…

In 2016 it was clear by 10 pm that Hillary was not getting the vote she needed from Midwestern cities and she was going to lose.

I agree with this take. I remember being on a group chat with friends on Facebook, and by 6:30 or 7 on the West Coast I had some major heartburn going on. But back to the thrust of their original argument: If at 10:59 PM EST we’re staring at a map that is 193 delegates in favor of Biden, and 162 delegates for Trump, just about every network in the country is going to call the race when the clock strikes 11 on the East Coast… 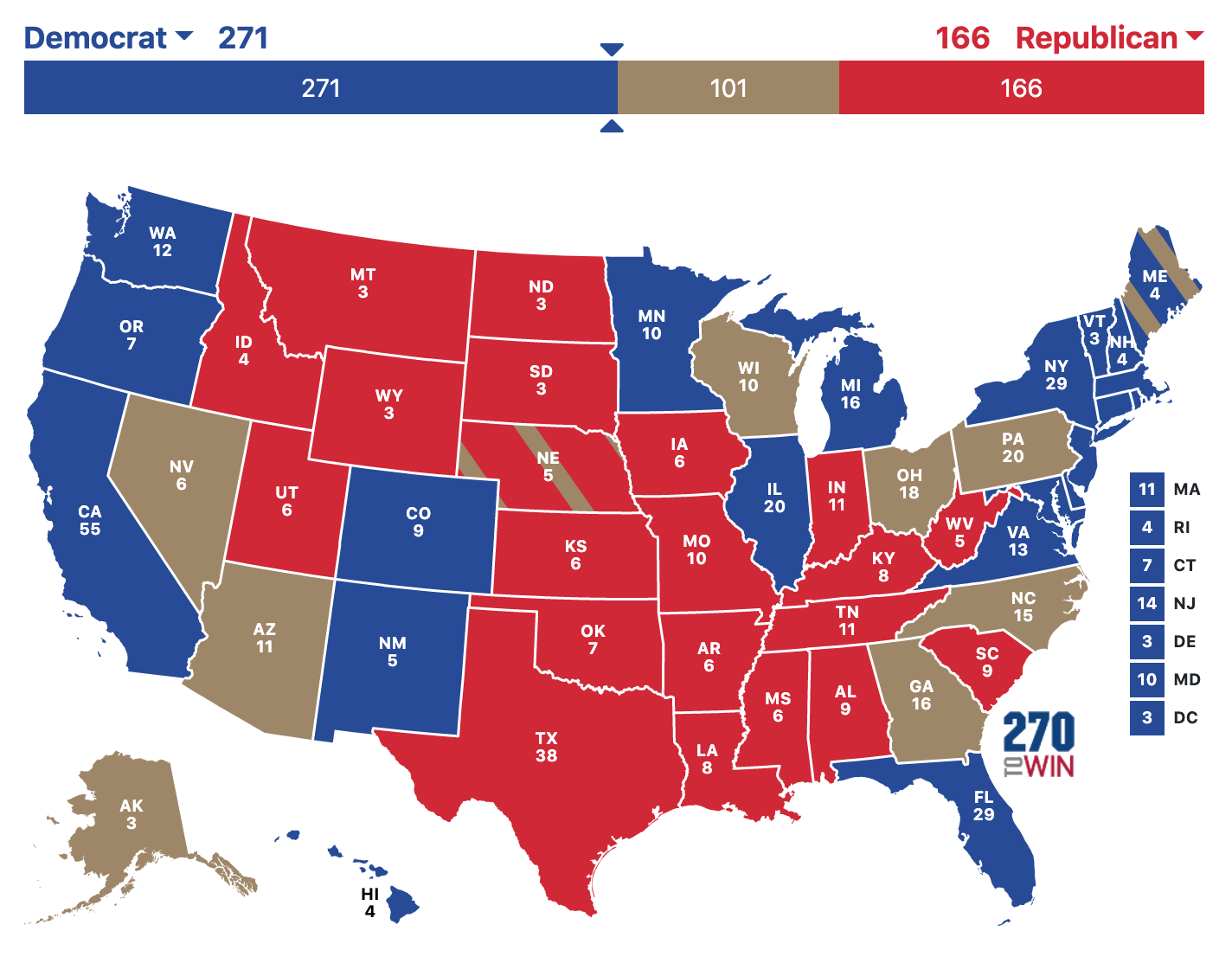 So, even though we won’t “know” who is going to win until 11, if the above is the rough shape of the map by 10 pm, then we’ll just be waiting for an hour to make it official (and watching downballot races).

In short, when polls close at 8 PM on the West Coast, the 78 electoral votes belonging to California, Oregon, Washington, and Hawaii will immediately fall into Biden’s column, because there isn’t a chance in hell that Trump is winning any of them. Thus, if Biden hits 192 or more electoral votes by 10:59 EST, he has it in the bag. In the scenario above, 8 states and two districts (one in Maine, the other in Nebraska) can still be outstanding, and we already know enough.

If Florida isn’t in Biden’s column by that time, which would likely only occur if polling has tightened significantly by election day, he can make it up by decisively winning in Wisconsin, where he’s currently favored by 8.7%, and Pennsylvania, where he’s favored by 7.8%. Having either state called on election night, even with heavy vote by mail, isn’t particularly unlikely. On April 5th, while Wisconsin was being wracked by COVID-19, the state held their primary. While the primary wasn’t of any particular consequence, as Biden was already the presumptive presidential nominee, the state was also having an extremely contentious judicial election for the Wisconsin Supreme Court.  Despite the chaos, Jill Karofsky, the liberal candidate won by a large enough margin that the election was called that night. So, a scenario where we know who wins the election on election night isn’t out of the question. And it’s a scenario that 2020 Delegates is fairly confident in.

What will probably happen is the networks will call some state and Trump’s campaign team will go Rove 2012 and try to argue against it on air. They freaked out because “Obama is only ahead by 900 votes!” and he ended up winning by 160k.

Ultimately, what election night looks like will depend on how proactive voters are about… you know. Voting.

If voters want to do their part to avoid the nightmare scenario currently being contemplated by many, in favor of the almost anticlimactic situation described above, here’s what you can do:

2020 has not been a kind year. Let us all hope that Election Day proves to be an exception to that rule.

Acknowledgements: The above writeup incorporates quotes and linked resources from tweet threads by 2020 Delegates, which can be found here and here, as well as additional comments which can be found by digging through the “tweets & replies” section of their profile.

Sanders’ Last Stand: The State of the Democratic Primary

Theme by Anders Noren — Up ↑